Telling your spouse you want a divorce 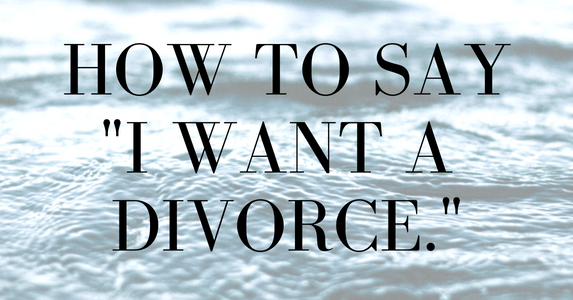 For both spouses, it’s a difficult conversation to have. People put it off or rush into it headlong because they don’t know how to go about it. We’ve had more than one case where a person having an affair left photos or videos of the affair out in such obvious places, it seemed to be a way to ask for a divorce without asking for a divorce.

Having heard from both sides of the conversation over the years, I think it’s best for the person who wants the divorce to have a strategy about what they will say to initiate the conversation say and then try to listen as much as possible for the rest of the conversation. Keep in mind that the only goal of the conversation is to take the single step of telling your spouse. Anything else is likely to unravel to an unproductive argument. For example, trying to convince your spouse you have good reasons for wanting a divorce tends to make things worse. Trying to put together a timeline or split up furniture or assets or children can go to an even uglier place.

This article gives some really good advice on where to start: https://www.psychologytoday.com/blog/divorce-grownups/200911/telling-your-spouse-you-want-divorce. This can help you get started planning out the conversation beforehand – both in terms of how to have the conversation and what to say.